The New Dimension in co-op with Alf Yngve is very pleased to present to you what was originally an unfinished RGCD 16KB cartridge compo 2012 entry, and a Games That Weren't game.  Amazon Tales. A sideways scrolling throw stones in the jungle 'em up game for The Commodore 64. This game features:

This game is also PAL/NTSC compatible and like with many TND games it is FREE.

Deep in the heart of the Amazon, in a small village, a friendly tribe recruited you, Gemma Hunter as a professional vet to look after their animals.  You have been asked vaccinate a terrified elephant from an illness that could be proved fatal. Just as you open the pen. The scared elephant sees what you are up to and it makes its escape through the main jungle.

The tribe, who you settled with are very unhappy with you for losing the elephant. If you are to stay and settle with them in their village, you must find the elephant. You also cannot return back to the village until it has been found and brought back to safety.

Guide Gemma through the Amazon in search for the missing Elephant. So that you can take it home and safely vaccinate it from an illness, which could prove fatal. Unfortunately, you will not be alone and your trek through the forest will prove to be a deadly one.

During your long journey by foot, you will encounter many dangerous animals, tribes men, temple guards and many other nasty surprises. Luckily for you, there are rocks that can be thrown at these nasties. This can be done by pressing FIRE on your joystick. Beware, some enemies can be defeated by one hit of the rock. However, other enemies require more than just one hit before they are defeated. Also remember that you cannot destroy the flying spears, ground traps (unavoidable when the full blades are showing) or boulders.

There are 7 levels in total. They are as follows:

On this stage you are running by the river side. You will encounter just small animals and reptiles. Make sure you don't get bitten by the snakes, leopards or crocodiles.
2 – The Forbidden Camp

You are about to step into hostile restricted territory. The Pygmy tribes men are your biggest threat in this stage of your journey. The evil tribe are hunters and they will take nobody for granted. These soldiers are armed with a blow pipe and some poisonous darts. Should you get hit by a dart, you will lose a life. You can defeat them with 2 hits. Also watch out for bigger snakes and large tigers.

As you enter the jungle, the tribes men will still try and hunt you down. Watch out for the creatures (from previous levels) which might bite you if you walk too close to them. Above the trees are gibbons. They will try to knock you out with coconuts.

4 – The Dark Rainforest
This is the main hunting ground for the tribes men. You have to watch out for their traps, the hunters, and also flying spears, as well as the animals that bite.

Watch where you step when you traverse across the sand plains. First of all, the usual creatures and tribes men are hunting. However, there is another obstacle, which you should also avoid. Although the sand plains look pretty much harmless. Avoid stepping into the central area of the plains. That is quicksand. If you step into quicksand. You will lose a life. Also watch out for the rolling boulders. They are deadly and indestructible.

After successfully leaving the sand plains, you will enter the dark cave. It is very creepy and consists of deep black holes, which you can fall through. However, you won't be alone in the caves. There are flying spears, rolling boulders, and deadly spiders will spawn out of the holes.

7 – The Jungle Temple
The final part of the journey is the sacred jungle temple. This place is heavily guarded by temple guards. They will appear from some of the doorway entrances. They will also try and spear you down. Also watch out for the usual enemies, you have encountered in previous levels. After you have passed the temple, you will have reached the lakeside, where the elephant, which you need to return to the village, is hiding.

During the long trek through the Amazon. You can pick up the following items, which can help you fulfill your quest.

The gods of the Amazon are watching you and they want to help you. If you pick up a glowing idol, the gods will give you protection for a temporary amount of time.
You are also protected every time you start a new level or lose a life.

If you pick up a sacred chest, the gods of the Amazon will give you an extra life.
Can you safely retrieve the elephant and bring it back to your village, or will you be kicked out of the tribe?

Click on the ZIP archive to download, and use any zip file extraction software compatible. Place folder on to your hard drive for use in VICE, CCS64, or on to a USB for the Commodore 64 with external hardware (or Ultimate 64). This game should also work on all new theC64,  and theC64mini without having to make any alterations.

Cool game man! I played it and liked it instantly. Simple yet fun!

I even loved the old school soundtrack. Brings back memories.

Thanks for the trip! 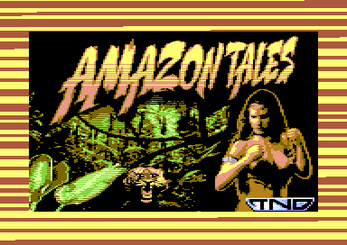 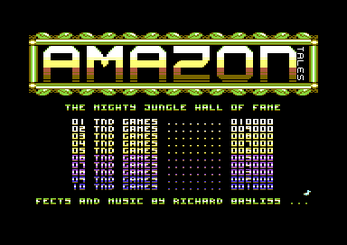 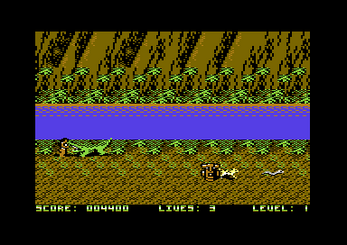 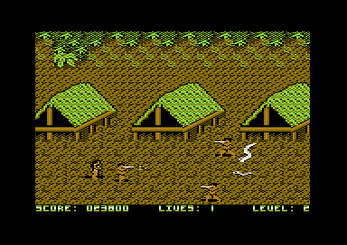 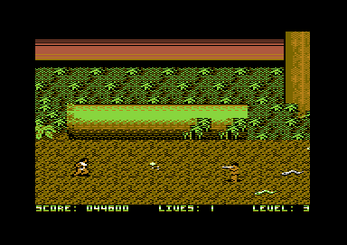