This is a stunning constant vertical scrolling shoot 'up which made 3rd place in the Official C64 SEUCK Compo 2019. This is the enhanced prize version of the compo entry. Featuring:

SCENARIO: "Base calling Green Dragon and Blue Dragon... Come in, pilots! You are off course. Explain!"

"This is Green Dragon. We are officially defecting. We declare political asylum."

"Base to Green Dragon. Treason will be punished! We will shoot you down before you reach the border! Turn back now!"

"This is Blue Dragon. Shove it, Base. We're leaving."

"Base
calling all military personnel! Code Fulgur! Green Dragon and Blue
Dragon must not leave the country. Stop them at all costs! Repeat, code
Fulgur!"

You control two fighter ships at once. The base has sent in their armed fighters to put an end to your escape. After all you have caused treason. Your fate is simply to be shot on sight.

Your mission is simply to survive and reach the exit of the border of your country, in order to seek political asylum and safety.

The BLUE ship flies close to the ground, and may crash into tall ground
obstacles. It fires forward only.

The GREEN ship flies at a higher altitude and cannot crash into ground obstacles. It can fire in all directions.

Hints: Collect crystals to gain smart a bomb... The border will turn red. Simply hold down the fire button to activate it.

Fulgur consists of in game flashing and shaking, which may harm some gamers while playing this game. Should you suffer from any form of epilepsy or any other sensitivity to strobe lighting. It is highly recommended that you DISABLE the flashing feature on the RED SCREEN health warning.

Simply open the .zip archive and extract all of the files. Then transfer the folder 'Fulgur' to your USB/SD card for playing in VICE, CCS64, or custom C64 hardware like the 1541Ultimate 2 or Ultimate 64.
If running in theC64Mini, the score panel will not be visible. It is advised that you create a .ctm file to set the vertical position of the screen to be able view the panel and lives. 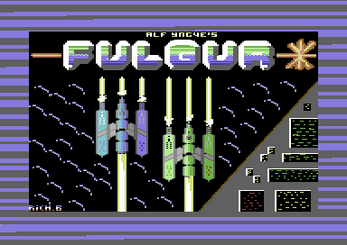 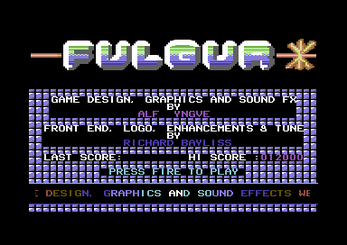 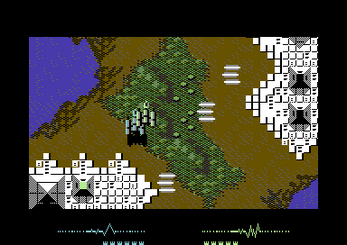 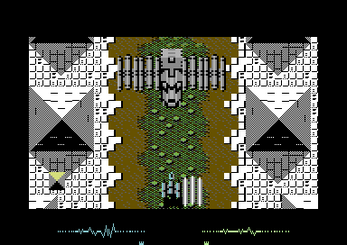 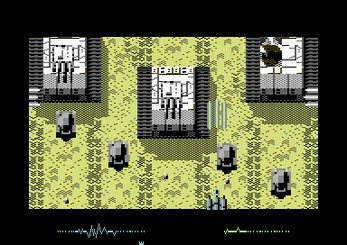