- Enhanced graphics, even better than the original tape loader
- Full presentation
- Animated background and sprites
- Sound effects and remix of the Happy Blocks loader theme tune (As in game music)
- Wacky edited samples, recorded and made by the author, himself
- Hi Score table

You are Happy, a light blue block who is positioned at the very bottom of the screen. Your objective is to simply survive sets of nasty falling blocks  as they fall towards you. Simply locate the gap and squeeze through it.

You can force the nasty blocks to fall quicker by triggering a drop boost, at the right time, using the fire button.  You had better watch out though,  because if you make one big mistake , Happy will not be happy no more. Instead, he will be tossed into oblivion, and all you get for failure is GAME OVER (And possibly a high score)!

The game will start slow going, but for every 20 groups of blocks that have passed, the game will speed up, and become more intensively crazy. Also you'll be awarded five more drop boosts.  Even if the game speed has reached its maximum speed - which is just plain nuts. Seriously it is :)

How long can you survive for, and will you be able to gain a position in the top 10 hall of fame?

This game is PAL+NTSC compatible

After downloading, extract the folder RELEASE from the ZIP archive (Rename if you need to after unzipping) on to a USB and place in to your 1541Ultimate, Ultimate 64 or theC64 mini or Retropie console. If you wish to play this game on your PC. I suggest you download a C64 emulator, such as VICE, or CCS64. Attach .D64 or .TAP image from folder. 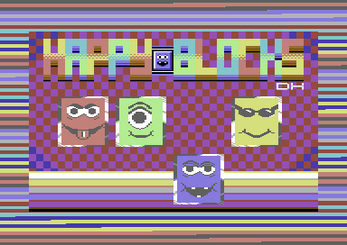 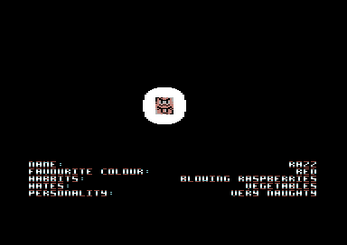 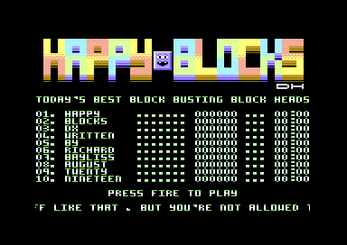 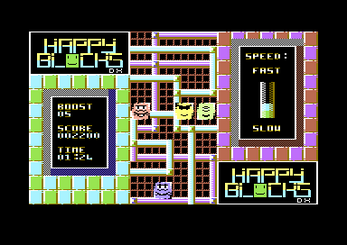 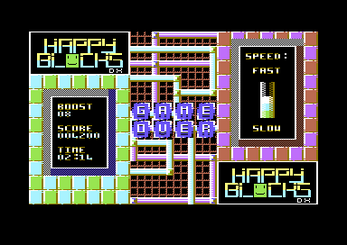