This is a deluxe edition of the single button game Little Nippers, which is bigger than the 4K version. The 4K version of this game was originally submitted for the 2022 4K Craptastic Game development competition run by Reset Magazine and Austrogamer.

This is a brand new deluxe version of this game, submitted for the Zzap! 64 Micro Action magazine issue 9's cover mount.

It is Summer time. On the previous day it was a beautiful day for beach-goers, who were swimming in the sea, bathing in the glorious sunshine. That was until it started raining. Everybody had to run for cover, their excuse – they didn't want to get wet. Even the people who were bathing in the sea ran off. A large family of children left 8 buckets on the beach which eventually gets occupied by red migrating crabs.

The migrating crabs were sleeping in the buckets for the night. The next day was a glorious day, with a long-term forecast that it will be sunny all this week. The sleeping crabs get a rude disturbance by a stampede of running kids. This has made the crabs more grumpy and want their revenge on the pesky kids, so they have called on “The Lord of the Crabs”, which of course is you.

This is a funny hi-score attack challenge, which features 8 levels to complete, and 5 skill levels to select from. On the title game options screen, select the skill level to start, and then start the game. The game skill level options are as follows:

The higher the level, the less bonus points you will get on level completion, due to the limited number of crabs which you have.

You have eight buckets lying in line on the beach. There are kids running across the beach at varied speed (depending on the level which you are on). The idea of this game is to use the fire button or the space bar key to launch a crab out of the bucket and move towards its target and nip the kids' feet.

If the crab enters the deep area of the sea, you will lose a crab (the crabs left is your lives counter). No crabs are lost if it successfully nips an enemy, or a successful sting by the jellyfish. You will get all of your crabs back after you complete a level.

Scoring and completing a level

You will also have a set target number of kids in which you need to nip before you successfully complete a level.

Bonus points can be scored on level completion. The amount of crabs you have left at your disposal are counted down, and 1000 points for each crab will be added to your score.

There's also a surprise in store during game play. A little reward in fact. If your score panel reaches every 10,000 points, you will also get to fling a jellyfish to sting the running kids for double points as your next move, but of course the same rules and penalties apply. So no slacking!!!

In order to win the game, you must complete all 8 levels. However, after all 8 levels have been completed, you will start the game again on a higher skill level until you have reached skill level 5– should you wish to. Otherwise the game is over.

The game is over when all of your crabs (including jellyfish) have fallen into the deep area of the sea (Crab count = 00).

In game graphics and loading bitmap by
Hugues (Ax!s) Poisseroux

Copyright notice: This game is freeware - not commercial.

You are welcome to copy this production and share it with your friends, host it onto your websites, etc. However you are not permitted to use this production for commercial sales in physical or digital form by any means. Please ask the author for permission first.

I wish you showed what bucket was next/active.
Could you add that? Maybe high light the bucket somehow?

There is no need, because inside the bucket is a timer. Once the timer clock = 0, the crab/jellyfish gets released ignoring everything and goes into the sea :) 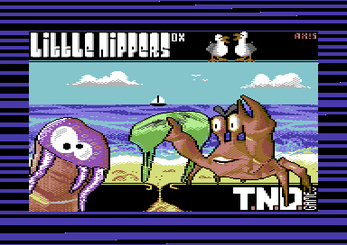 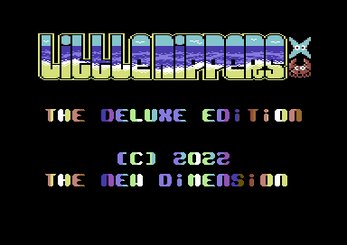 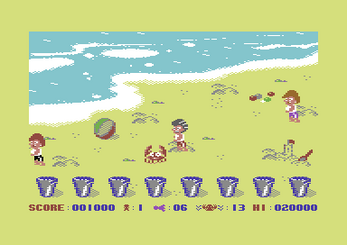 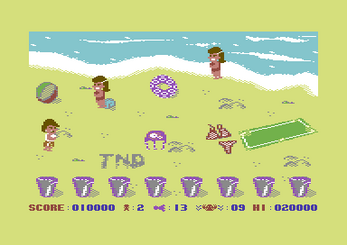 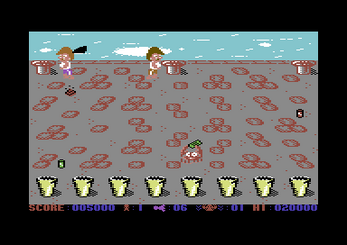